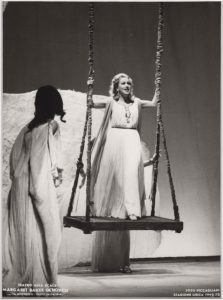 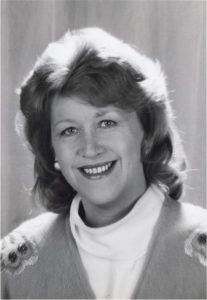 It is with deep sadness Margaret Baker-Genovesi passed peacefully away on 23rd February 2022. Margaret was a valued and loved member of our Music Advisory Council for many years. We thank Margaret for her enormous contribution.

Margaret began her career in her native Australia while still a teenager, and made her operatic début at the age of 20 in the role of Violetta in La Traviata for the Queensland National Opera. After winning scholarships in Italy to the Accademia di Santa Cecilia, Rome, and the Accademia Chigiana, Siena, she continued her studies in Germany, eventually settling in Rome, from where she pursued an international career as singer and later teacher.

Her vast operatic and concert repertoire covers four centuries of European music, from the Baroque era to the XX century. Her European début was in the role of Susanna in Le Nozze di Figaro (Rome); there followed leading roles at La Scala, Milan; Theater an der Wien, Vienna; Teatro alla Cometa, Rome; the Victoria State Opera, Melbourne; Festival Hall, London; Tonhalle, Zürich; Suisse Romande, Lausanne; the Festivals of Vienna, Salzburg, Moscow, Brno, Spoleto; concert tours through Europe, Asia and the Middle East; and recitals for Europe’s principal Radio-TV networks. She has performed and recorded with distinguished conductors such as Gianandrea Gavazzeni, Nikolaus Harnoncourt, Peter Maag, Sir Charles Mackerras, Wolfgang Sawallisch, Sir David Willcocks, to name only the most renowned. In 1987 she was given the signal honour of representing Australia at the First China Arts Festival in Beijing.

From 1986 to 2006 she was a regular member of the Juries of some of Europe’s most prestigious singing competitions: among others Munich, Salzburg, Nuremberg, Coburg, Graz, Sulmona, Gorizia, Cologne. She has taught and lectured at tertiary institutions in Italy, Germany, Hong Kong, China, and Australia, and her private students are today starring in principal roles in the leading opera houses of Europe, America, Australia, and Japan. On re-locating to Australia in 2007 she established a private teaching practice and has since collaborated with the Young Artists Program of Opera Australia, the Queensland Conservatorium-Griffith University and the University of Queensland, and has co-adjudicated Australia’s major singing competitions, among others the Mietta Song Recital Award, the Acclaim Awards Puccini Competition and the Italian Fellowship Competition, the McDonald’s Operatic Aria, and the Opera Foundation Australia ‘s Awards and Scholarships.

Find out about upcoming events

Support the future of opera