Past Winners Performance Roles in Australia 2016

What did winning this award mean to you?
Winning the 2016 American Institute of Musical Studies award from the The Opera Foundation for young Australians was an honour.

In 2014 I was a finalist of The Foundation’s Lady Fairfax New York Scholarship and this positive experience and encouraged me to audition in Europe in 2015 where I was accepted by the Swiss Opera Studio.

I was therefore able to return to Sydney for the Foundation’s 2016 Auditions and audition for the AIMS award showing the development of my craft over the last two years.

What was the experience like?
The AIMS summer program in Graz, Austria is an experience like no other! It is a melting-pot of different American cultures. There were participants from many different states as well as students from South America. I have moved to different countries throughout my life and had visited both the East and West coast of the US previously and this certainly allowed me to reap the most from the experience although I must admit it was still pretty full-on.

The intense side to it was not so much the American side of it (which I loved!) but more the result of over a 100 hundred singers coming together for six weeks…! I was blessed to share the suite with wonderful girl; we both helped to make each other’s AIMS experience all the more rewarding and we remain in contact. Graz is a beautiful city with great hikes and cultural venues to visit- there was so much to do if I needed a bit of time out. The standard of the singers at AIMS is really high and everyone was there to learn and to contribute to the highest possible standard of music-making and artistry…I cannot remember how many concerts I was invited to participate in… from performing Obradors in a Spanish concert at a Count’s mansion in rural Austria to performing Adele with the AIMS orchestra in the operetta concert at the Graz’ Kasematten. The 6 weeks spent in Austria require a great deal of mindfulness: if you are not in the moment to learn but also laugh then the 6 weeks will fly by without breathing them in.

What opportunities has the experience presented?
At AIMS I was provided with the opportunity to audition for two agents and the feedback allowed me to start my second year of the opera studio in Switzerland feeling focused. I have my first professional role as Celia in Mozart’s Lucio Silla with Theater Orchester Biel Solothurn in 2017. I am very grateful to the Dalwood-Wylie Foundation for the opportunity to take part in AIMS 2016. I will be able to put the skills I acquired in the summer program to use in the role with Theater Orchester Biel Solothurn.

Thank you to the Dalwood-Wylie foundation for supporting this wonderful Award and all at the Foundation that are involved in making this happen and most importantly continue for other young Australians.

Message from Helena Wylie of the Dalwood-Wylie Foundation
“I have always loved a combination of great music and great drama. Opera, in my opinion, is the most ambitious of all the arts, and is the international benchmark of cultural genres. I think it is concerned with attempting to give artistic expression to what it means to be human.  I support the American Institute of Musical Studies Award provided by The Opera Foundation for young Australian’s because the 6 week summer school in Graz, Austria, provides students with exceptional training and development in their art. I believe it is an experience that takes the performer to the next level.” 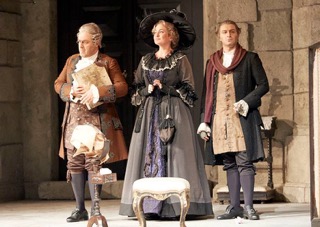 Marcellina (with Carlo Lepore as Basilio and Matteo Falcier as Don Basilio) in Le Nozze di Figaro while on tour with the Staatsoper in Japan, Maestro Riccardo Muti conducting. Photos by Michael Pöhn.

How would you describe your experience in Vienna so far?
My experiences in Vienna so far have been absolutely incredible. I have had the chance to learn a huge amount of the mezzo repertoire whilst working with some of the best musicians, conductors, directors and designers in the industry. There is no house quite like the Staatsoper anywhere in the world, it is an honour and a pleasure to experience every day.

Any invaluable lessons?
I have learned many valuable things in my almost 2 years here, but a big one was to really learn my covers well! The role that I thought I would never go on for (and as a result didn’t put as much focus into it as I should have) was the one that I jumped in for with one hours rehearsal! Despite my insecurities about my preparation the performances went well, and I learned to always, ALWAYS prepare my covers as if I will be singing them with one hours rehearsal!

What is the difference this Award will make to your career?
The Vienna State Opera Award has changed my career path and my life in a dramatic and exciting way. The last 2 years have been an incredible whirlwind of music and art and beauty. I was guided straight into an incredible house and afforded the opportunities to hear, learn and perform wonderful opera around the world.

Any words of advice for next years auditioning artists?
As advice for next year’s applicants, do your best to learn some German language. If you can communicate (at least a little bit) in German it demonstrates respect for your colleagues and employers. I spend about 60% of my time at work communicating in German (if you have some French and Italian, it can’t hurt either!). Also understand completely what you bring as an artist. What repertoire have you already learned? What roles could you offer to a company like The Staatsoper that you would be ready to sing tomorrow? What do you bring to the stage? Where do your strengths lie? What are your weaknesses? In short, as a performer you are a product, know your product inside and out.”

I sincerely thank The Opera Foundation for young Australians for this life changing experience. 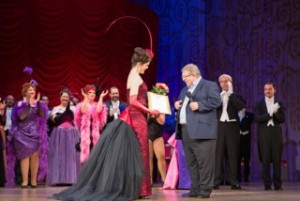 On Thursday 7th July 2016 Valda Wilson gave a beautiful performance at our supporters Soiree at Fairwater.  Valda was the Foundation’s winner of the 2008 Rockend National Opera Studio London Scholarship & Robert & Betty Salzer Award.  She will be performing the lead of Theodora in Pinchgut Opera’s production of Handel’s Theodora in November and December of this year in Sydney.  Here is an update from Valda:

“I won my award while working for Opera Australia’s Schools Company, singing The Barber of Seville.  This was exactly the big break that I needed at the time: The scholarship provided extremely generous funds for tuition and living in London, studying for one year at the prestigious National Opera Studio, and then sufficient money to cover an extra year living in the UK after that.  This afforded me the opportunity to audition in many places – including Dresden, Germany, where I eventually ended up working full-time at the Semperoper.

This career takes time, patience, hard work and a good attitude.  There will be difficult moments – no matter how glowing the Facebook feeds of your overseas friends seem to be.  Starting out at the NOS, I was stunned how far along some of my colleagues were.  Initially it was intimidating, but I learnt a valuable lesson:  Yes, DO constantly reevaluate yourself and your studies and your work – Are you spending enough time on bel canto exercises? Are your jaw and tongue released?  Keeping an eye on that habit where your right arm rises like a phantom limb during a long and difficult phrase?  etc – however the second you start to compare your journey too much with that of the person beside you, you do yourself a disservice.  Mentally more than anything else.

The Rockend Scholarship provided me first of all with fantastic tuition, with top coaches (several of whom I still work with when I visit the UK), and also crucially introduced me to important people in the business.  It’s all about the connections – well, excellent singing and stagecraft first of all, then connections. Because of this OFA Scholarship and its ties (at that stage) to the Tait Memorial Trust, I became acquainted with Isla Baring… who had me sing at a concert for the Trust… at which Richard Bonynge was present… who then asked me to sing for Dame Joan Sutherland’s memorial service in Westminster Abbey with Antonio Pappano and the Royal Opera House Orchestra, and later to sing the title role in Rodelinda with him in Sydney.  Connections!  Of course this was a huge opportunity for me and has led to numerous other engagements, concerts, and working relationships.

I’ve found my niche in the German system and have spent six very happy years there, four in Dresden as part of their Junges Ensemble and as a regular guest, and most recently two years as the principal soprano soloist for the Oldenburg State Theatre.  The highly varied nature of the work there suits me well (this past season, I sang six major new roles, in a total of 65 performances… at one point in June I sang five nights in a row – four different roles!), as does the rich and varied chamber music scene, and the large number of festivals (I have now sung at the Salzburg Festival, Verbier Festival, London Handel Festival and Musiktage Mondsee).

My words of advice for first-time competitors…  I’ve already mentioned one big thing above:  Make your own journey and compare yourself only with yourself.  Be aware that this career will almost certainly mean you spend a lot of time away from ‘home’ and loved ones, and make sure you are honest with yourself that this is something you want and that you can deal with it.

I would also say that this job is about creating beauty and expressing joy.  Try to remember that when you step out there for your audition (I know this is hard!).  Your job is to express joy and beauty and eventually you WILL be rewarded for that.”