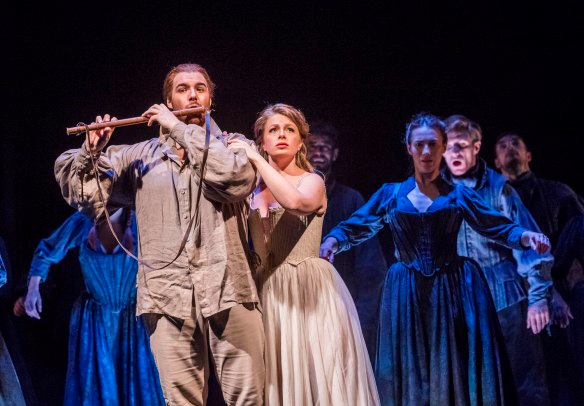 It’s been an interesting few years since winning the AIMS Award & AIMS Sundell Study Award back in 2011. The six week summer school in Graz, Austria was the first time I’d been able to focus my energies 100% on my singing development. It’s also where I met the wonderful agent Clemens Klug, who became my manager and an invaluable guide during my first years as a professional opera singer.

There have been many important experiences since then: moving to Germany to join the young artist program at the Deutsche Oper Berlin, with subsequent engagements at the Hamburg State Opera, Salzburg Festival, Grand Theatre de Geneve, Dutch National Opera (Amsterdam), Berliner Philharmoniker, BBC Proms, Paris Philharmonie and regular appearances with the Australian symphony orchestras. Right now I’m in Norway for concerts with the Oslo Philharmonic, before heading back to Berlin to sing Musetta in La Boheme over Christmas. In 2018, I’ll make my Australian operatic debut as Melisande in Pelleas et Melisande with Victorian Opera.

One major recent milestone was my mainstage debut at London’s Royal Opera House Covent Garden, where I played Pamina in Die Zauberflöte for eight performances and a worldwide cinema broadcast. It’s a dream come true to tread the boards in this hallowed theatre; the atmosphere is magic. The casting director first heard me at an audition in a competition a few years ago. Then in 2015, I jumped-in at five days’ notice to learn and sing the title role in Rossi’s Orpheus, a Royal Opera co-production at Shakespeare’s Globe in London. Die Zauberflöte formed the pivotal next chapter in a blossoming relationship with the company. Pamina is also one of my signature roles (having performed it in Salzburg, Berlin and through France) so I was thrilled that it was so well-received in London, too.

People often ask me why there are so many good Australian singers in Europe. What I think is wonderful about Australia is the wealth of support and scholarship opportunities available to young singers, which can act as a springboard to launch us into the international sphere. I certainly wouldn’t be where I am today without the support of The Opera Foundation for young Australians. Thank you!

“Best of all was Siobhan Stagg, a Pamina who seemed completely suited to the role, releasing a stream of beautiful sound when needed, and with the heft and passion to make ‘Die Wahrheit’ the hinge of the entire drama.” Roger Parker, Opera Magazine (UK).